Hello everyone, how are you feeling today? I hope you feel great, because I do! I’m now on board of the plane which is gonna take me back home at Florianópolis. Since the two cities are really close I’ll have only half an hour to finish writing this before my plane lands.

My Arrival at POA

I left Florianópolis really early in the morning on Friday and I managed to get at Porto Alegre (also known as POA) at 9am.

Since I had a lot of time to spend until I could check-in at the hotel I went for a walk at the heart of POA and took some pictures. 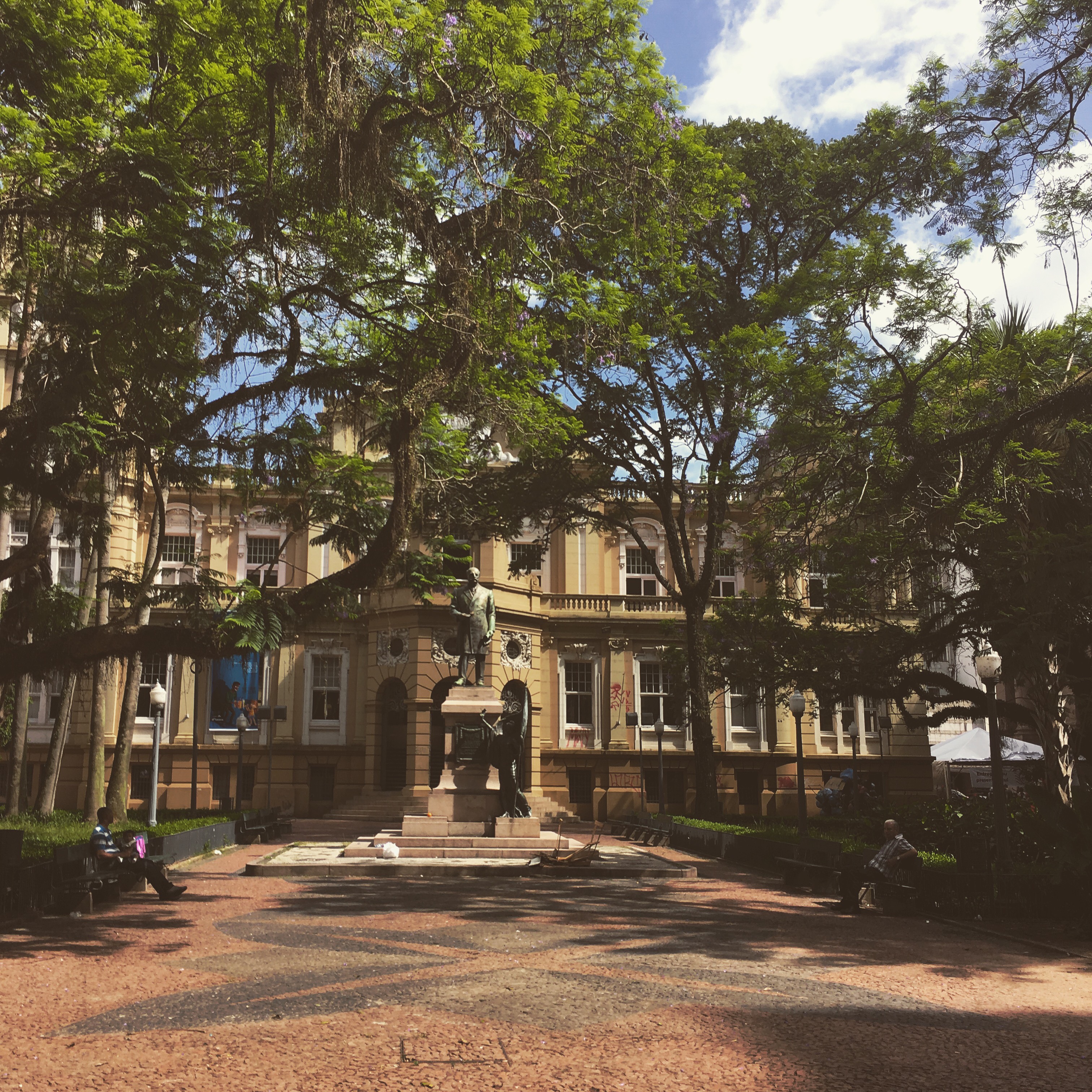 I also bought a few bananas, but, believe it or not, I was able to pay it in Euros. I had no money left on me because my wallet was in my bag, which I left at the hotel lobby, but I found a 1 euro coin in my pocket, which the guy selling bananas found to be really cool and said he would gladly take it in exchange for the bananas.

I’ve also hit the gym and took a little run on my way there and back to hotel.

As soon as I got to Front In POA I received an awesome @umbler t-shirt from the organizers, which by the way were really cool and made me feel at home. Thanks @jaydson and @felipenmoura! 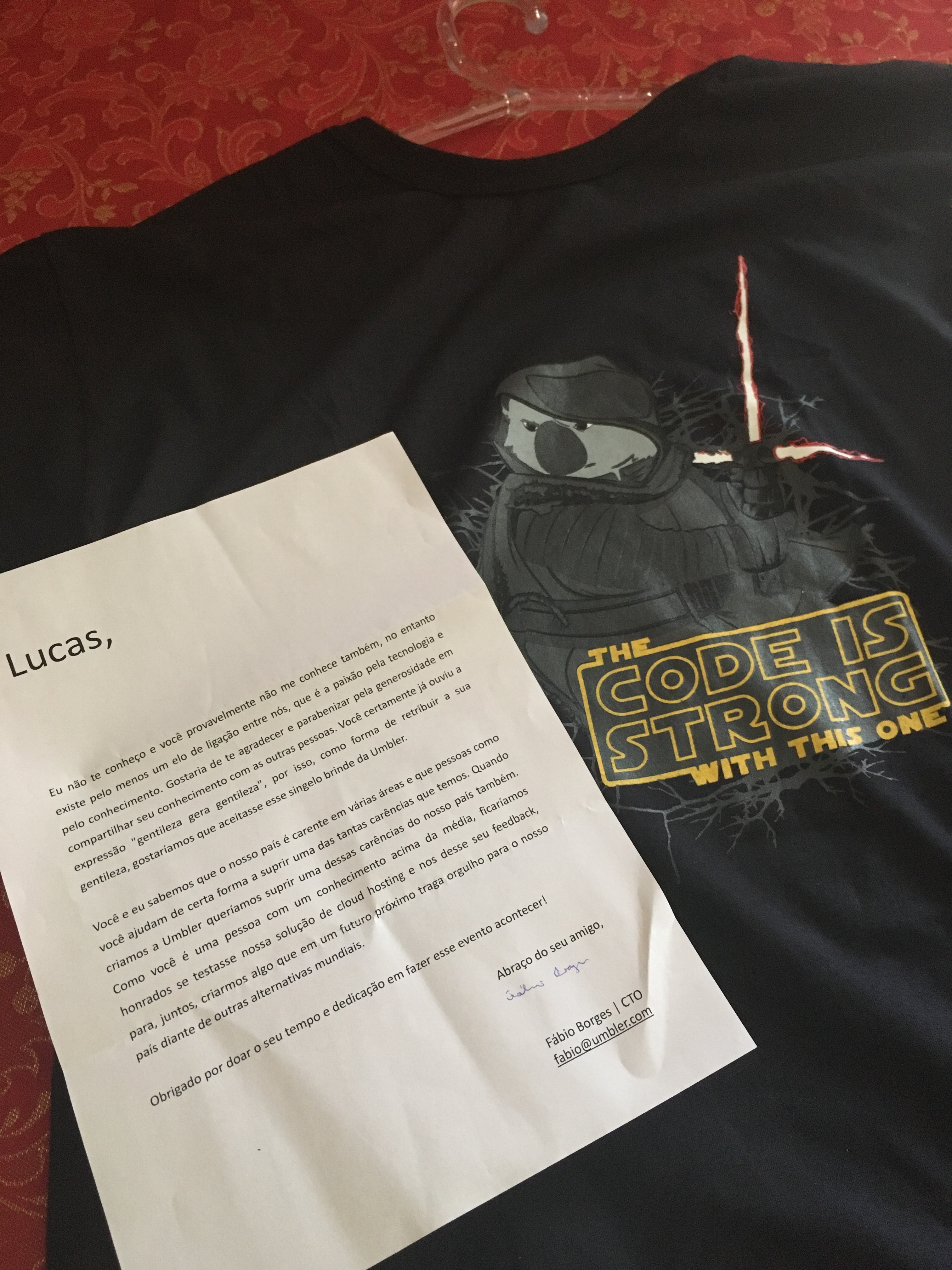 The venue was great: it had lots of comfortable seats, a big stage and high quality audio and recording equipment. The coffee break was delicious and I made lots of new friends at @FrontInPOA.

I was amazed by every single talk presented at the event, all of them were well prepared, had great slides and the content was even better!

We started the day with @jcemer talking about how to deal with front-end development in 2016 and the great variety of tools we face day to day. Then @olarclara talked about progressive WebApps, which is a hot topic right now, clearing any possible misconceptions anyone could have had about the subject.

Right after @olarclara we also had a great talk by @milenevlacerda which created the “Encoding Women” project to help other girls solve issues they may face in their professional life. She showed us great women in computer science’s history such as [Margaret Hamilton](https://en.wikipedia.org/wiki/Margaret_Hamilton_(scientist), which was the head of software engineering for the Apollo 11 mission and is one of my idols. I think we should talk about this in every conference we go to, thanks for your words Milene and keep this project going, Brazil needs it!

The last talk before lunch was given by a guy I also admire a lot: @obetomuniz. He talked about how it is to work remotely and the pros and cons of it. He gave us great tips and shared very interesting thoughts, both from the point of view of the employer and the employee.

Our lunch was delicious and was sponsored by @toptal, a great company which has been supporting events and conferences all across Brazil. Thank you very much! 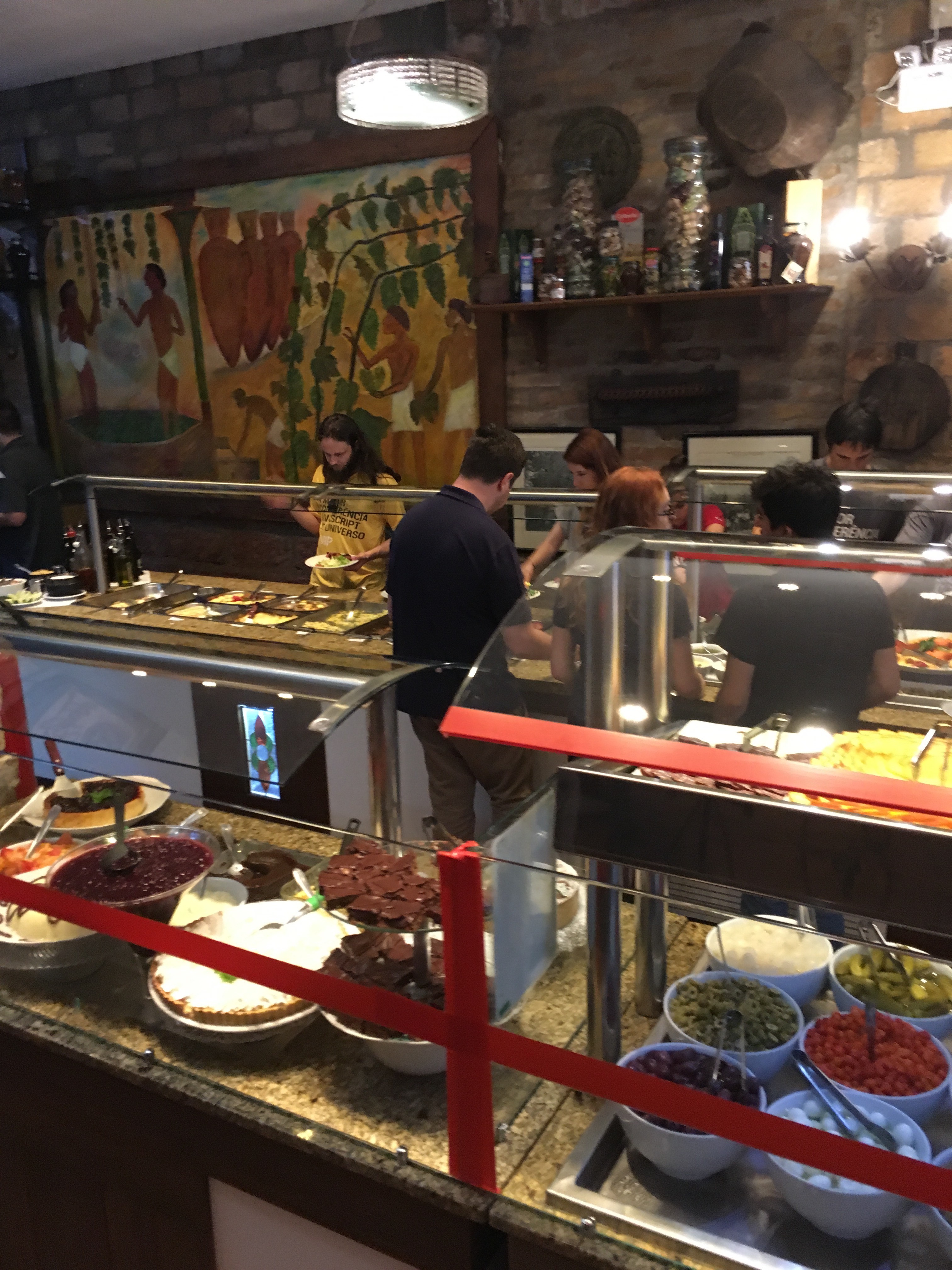 After lunch we had another great talk by @abnersajr teaching us how to do cool and effective animations with CSS.

He was followed by @deboracardu, who talked about digital marketing and why you should pay close attention to it. She gave us very interesting insights and made us developers think about a whole new way to write code because of the huge impact it can have on a marketing campaign. She had great speaking skills and should definitely submit talk proposals to more conferences, it would be awesome to see a talk by her again.

The next talk was presented by @hmschreiner. He talked about how to convince a team to adopt a new technology and what you should take into account when choosing one. Given the amount of tools we have to deal with these days, this was an extremely relevant subject. Thanks for sharing your knowledge, Henrique!

The talk before mine was given by @alinedecampos, which also had great speaking skills due to her being a teacher at @senacrs. She talked about soft skills and how important it is for developers in their careers.

And then my big moment had come! I talked about Meta Programming in JavaScript and showed how the language works behind the scenes. I managed to put the most important content from each one of my blog posts about Meta Programming in a single talk. Since that was quite a lot of content, I couldn’t add every single detail from the posts, but if you want to read them, these are the links for the the first, the second, the third and the fourth post of the series. 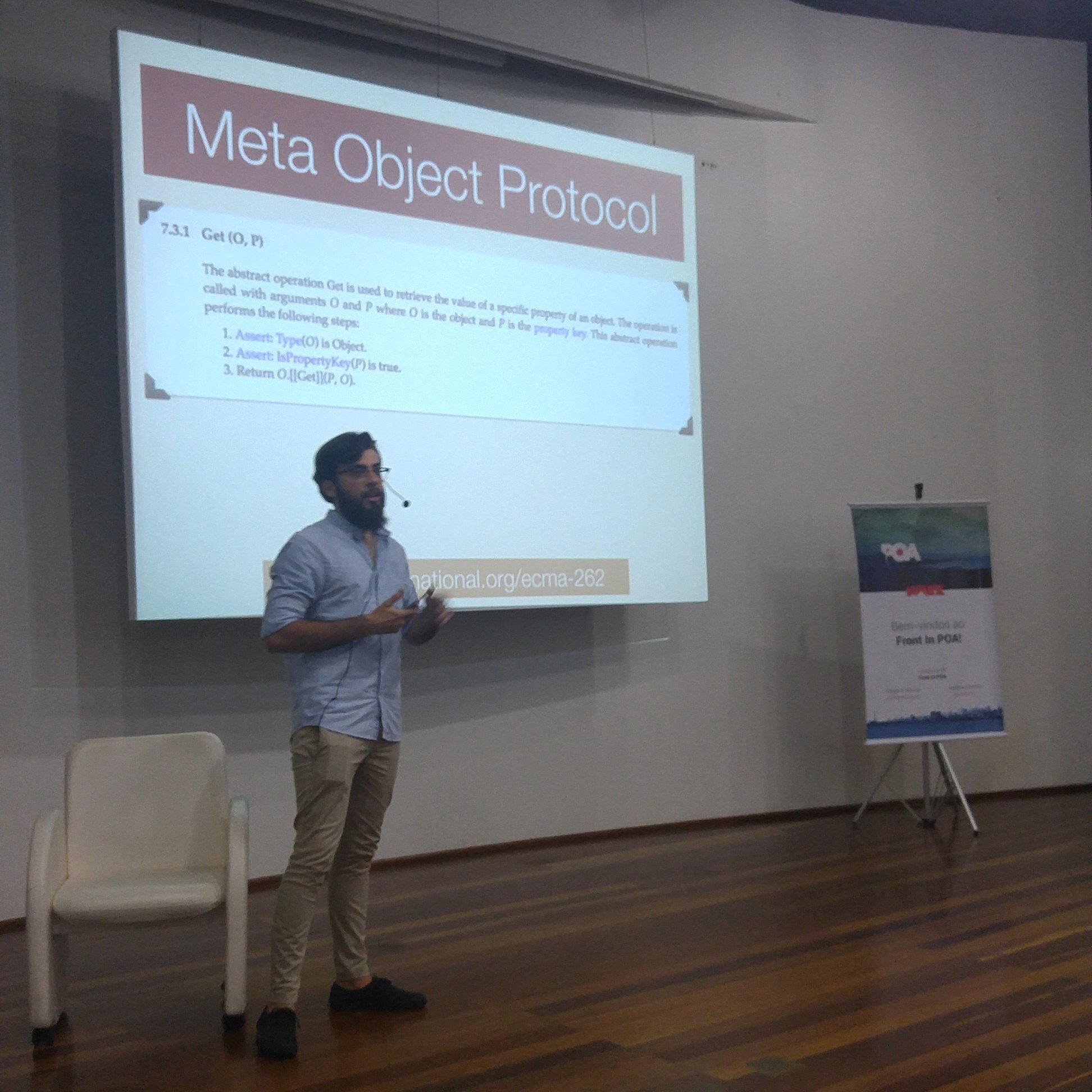 My slides for that talk can be found at this link and soon I’ll be posting the full video, which has been recorded by the great team hired by the event’s organizers.

I also did some live coding and people seemed to be impressed by my vIM “mad skillz”. Personally, I don’t think I’m really good at vIM, but I think I managed to get pretty efficient at it already. 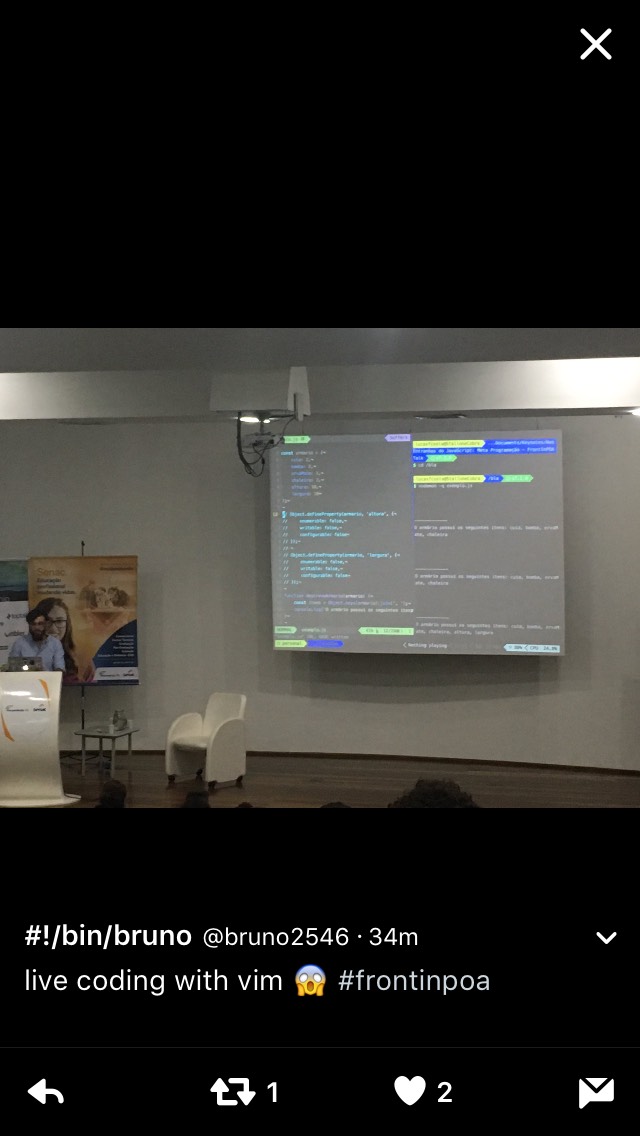 After my talk I was also interviewed by the organizers and we talked a little bit about why Meta Programming matters and how important it is. We even had time to leave a message by quoting one of my idols: @BrendanEich, which said: “always bet on JS”. Soon I’ll be posting a link for it too, stay tuned.

To close this awesome event we had another great talk by @alezanela, a journalist which showed us how important it is to have good communication skills and how it influences our careers on a daily basis.

After the event, me, @obetomuniz, @olarclara, @abnersajr and @brunocleitee went for a beer and a traditional “xis”, which is an hamburger with three times the size of a normal one. 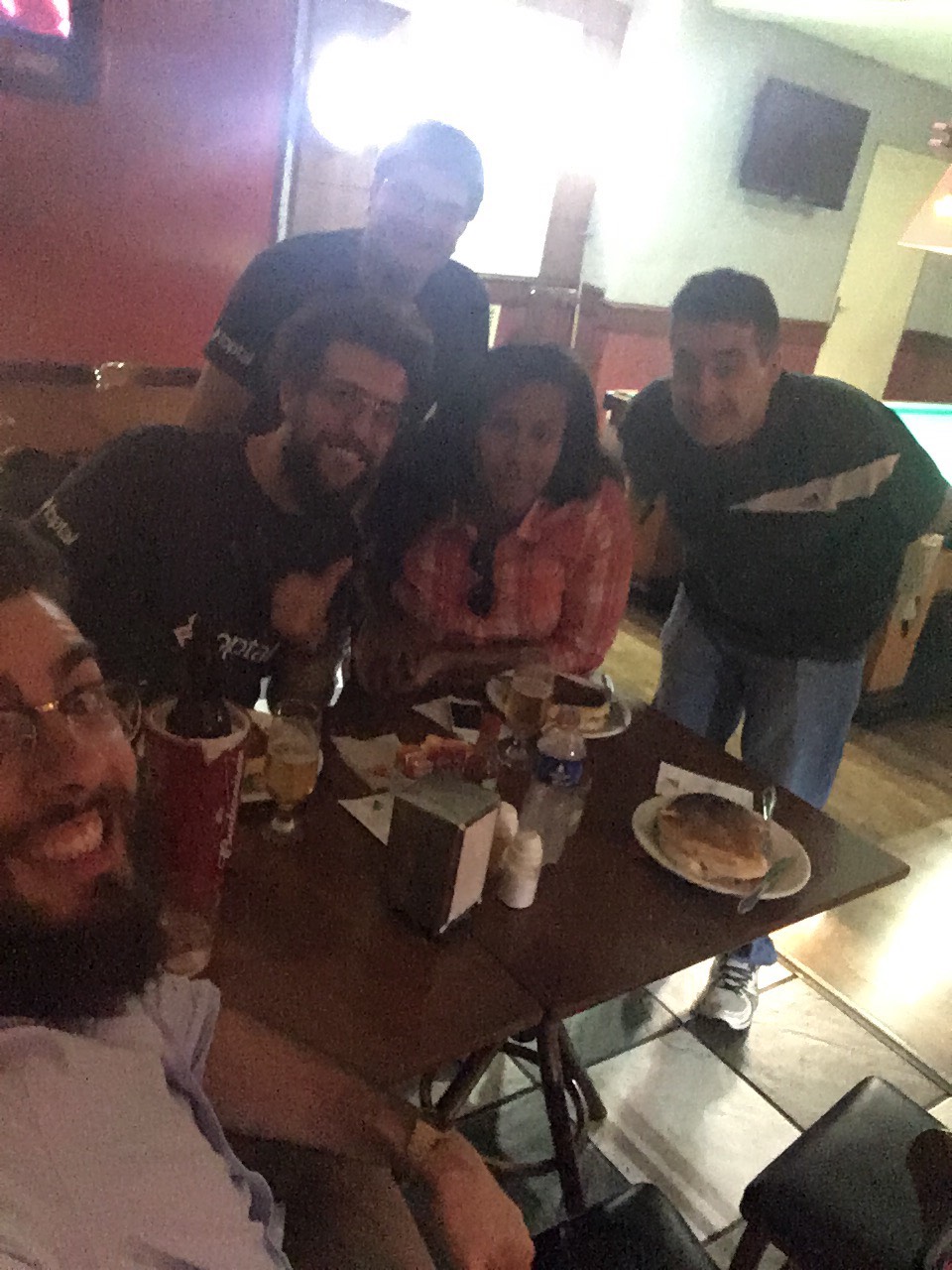 We talked about the Google Developer Expert Program and our adventures in the amazing world of open source development and technology in general.

They were kind, interesting and full of talent, it was a great honor for me to be able to hang out with such nice people! You rock!

I couldn’t end this post without sending special thanks to @jaydson and @felipenmoura for inviting me and organizing such a great event, you guys are awesome and I admire a lot what you do for the Brazilian community.

I also need to thank @toptal for sponsoring our lunch and for everything they have been doing for our community, @umbler for the awesome t-shirt, @senacrs for providing us an amazing venue and all the event’s sponsors.

Finally, thank you people for coming and watching these talks and thank you speakers for being such great friends, I hope to see you all again soon! 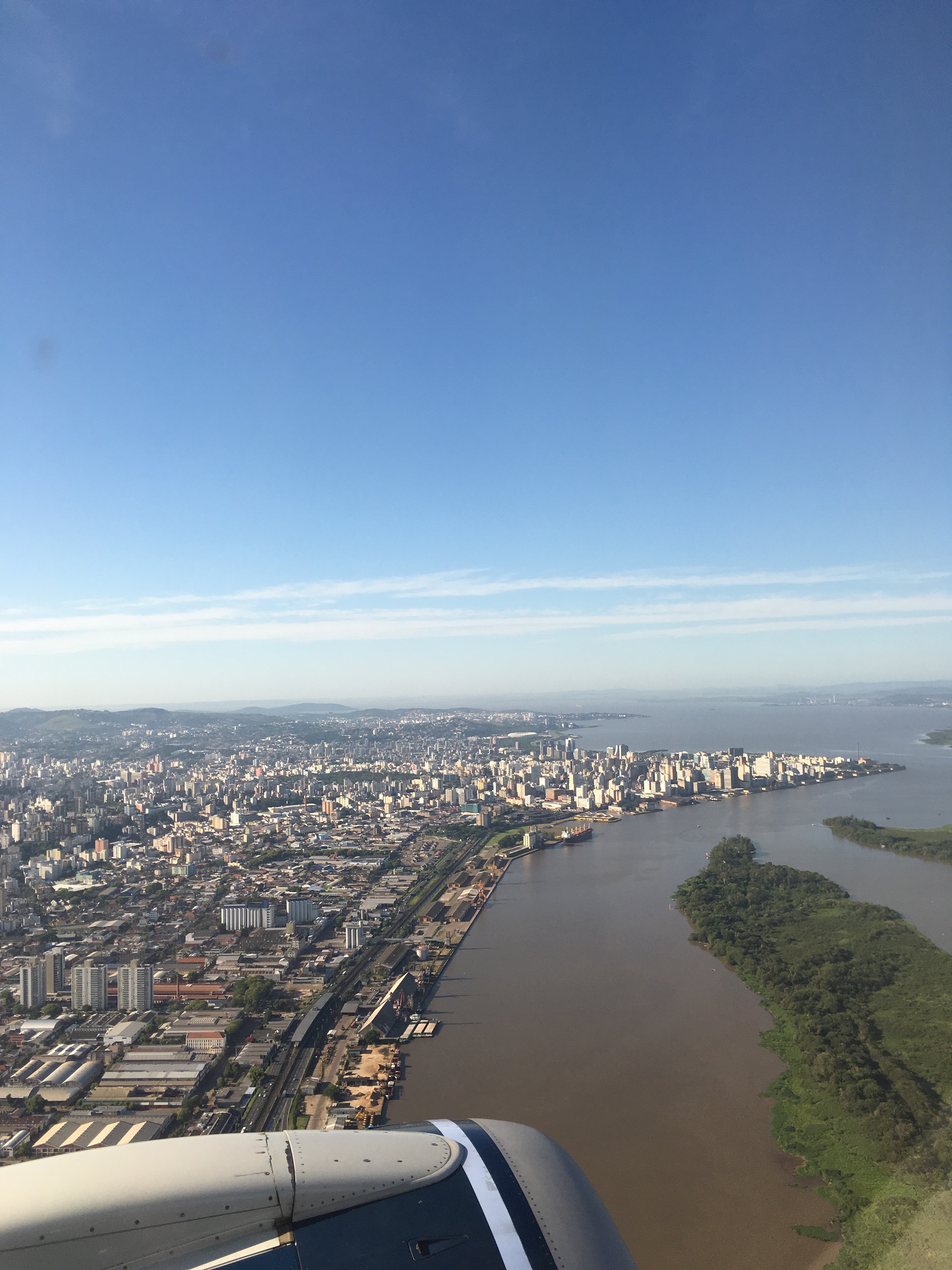