The Absolute Essentials for Bit Manipulation in JavaScript

This post aims to demystify bitwise operations in JavaScript, as they can be useful for a myriad of applications. They are also very useful, for example, when building emulators, an exercise I’d definitely recommend.

Even though I will use JavaScript throughout the whole article, these are the absolute essentials for working with bit manipulation and will definitely be useful in whatever language you end up using.

There are many ways of representing the same numbers.

We humans naturally use the decimal system as a way of representing numbers. This means that we can count up to 10 - 1 using a single place. Once we reach 10 in any of the places of our number representation, we carry one over to the next place. The number 22 is nothing but 10 units repeated twice plus 2 units.

In the same way that the system I described above uses ten as its base, we could have chosen to use any number as a base.

Hexadecimal numbers, for example, are nothing but numbers represented using 16 as a base. Every place can count up to 16 - 1. Once we reach 16 in any of the places of our number representation, we will carry one over to the next place.

In the same way that you represent the number 15 in decimals, you could represent it in hexadecimals using only F. The number 33 in hexadecimals can be represented as 21 since the 2 in the second place represents 16 twice and the 1 in the first place represents just that: 1. This is why it is important to know which base you are using to deal with numbers otherwise, you could have thought 21 was a decimal number and therefore interpreted it wrong. 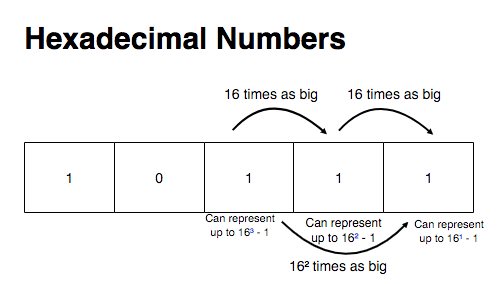 Binary numbers are nothing but numbers represented on base-2 and they have the exact same properties of any other base-x systems. Every time a place in a binary number exceeds 2 - 1 it will then carry one over to the next place. 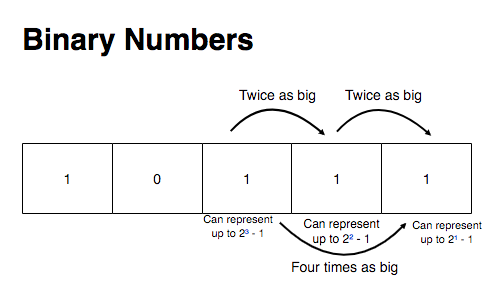 The bigger your base, the more compact the representation. This means that representing a number using hexadecimals takes a lot less space than representing it in binary.

It’s important to know how to deal with binary numbers in computer science because that’s the way computers see numbers. In the end, it’s all zeros and ones.

Our computers are this huge pile of transistors, an electronic component which can only be on (1) or off (0) and therefore by grouping up transistors we can represent bigger numbers, but only in base 2.

A byte is a group of 8 bits, which means that we have 8 places to hold zeros or ones and therefore we can represent a total of 2⁸-1 different numbers.

To work with representations in different bases it is important to dissociate numbers from their representation and learn the general properties of those ways of representing numbers, and this is what I’m gonna do in this post.

Representing numbers in these different bases in JavaScript requires us to start that number literal with 0 followed by a letter.

This is part of the ES6 spec and can be found under the Numeric Literals section of the specification document.

It is also possible to represent numbers in other bases (up to 36) by passing an argument (the radix) when calling toString for a Number. For example:

In order to convert stringified representations in different bases to Number primitives, you can use parseInt, which takes a string and a radix.

Before exploring how to perform common bit operations it is, of course, essential to know which operators are available for manipulating binary numbers and how they work.

It’s important to notice that whenever you use a bitwise operator, all of the operands get converted to signed 32-bit integers.

It’s important to keep this in mind so that you know what happens if the representations you are using at first have a different number of bits. In this case, they will be padded with 0 and the signal will be kept (at the leftmost bit, as usual). This guarantees the binary numbers you are operating with will always have the same number of bits.

Bitwise AND, when applied to a single binary digit, does exactly what you’d expect from AND: it returns 1 if both digits are 1.

When applied to two binary numbers it will return 1 whenever the corresponding bits of both are 1.

Bitwise OR will return 1 whenever one of the corresponding bits of the operand is 1.

Also known as exclusive or, it will return 1 whenever the two corresponding bits are different from each other.

This means that any combination of zeros and ones will result in 1, except 1 and 1, and 0 and 0.

NOT inverts an operand. Just as you’d expect, if it finds a 1 it turns it into a 0 and vice-versa. This transforms positive numbers into negative numbers and vice versa.

As you might remember, we use the leftmost bit of a binary number to indicate its signal.

The NOT operator is applied to each bit of a number individually. This means that 0111 would become 1000. This is also known as one’s complement.

When shifting to the left just imagine that you have an infinite number of zeros at the right, but no remaining space at the left so that when you shift a number to the left, the zero’s at the right get pulled in, but the leftmost number goes towards the wall.

Remember that operands are always converted to 32-bit integers. This causes only the 32nd bit (the leftmost bit) to be discarded when shifting. 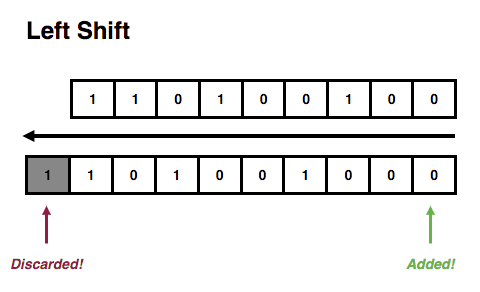 However, it is important to notice that the sign bit at the left will be added in from the left.

This is also known as an arithmetic right shift. 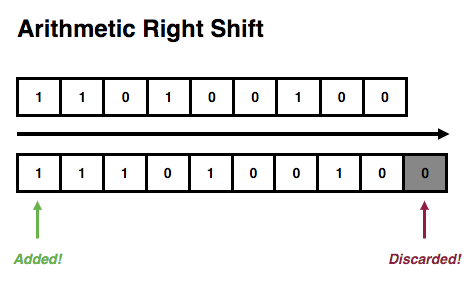 This right-shift also shifts a binary representation to the right, but always adds in 0s to the left, no matter what is the leftmost bit (sign-bit).

This is also known as a logical right shift. 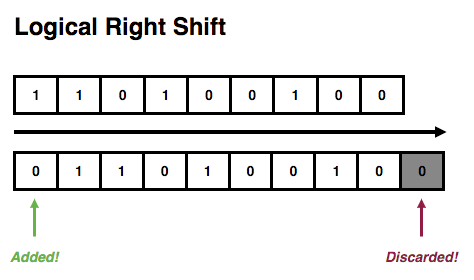 As we have explained at the beginning of this post, when doing addition all we need to do is sum two numbers and if they exceed base - 1, which in the case of binary numbers is 1, we carry one over to the next place.

For subtraction, we just need to perform an addition between the first operand (minuend) and the inverse of the second operand (subtrahend).

However, for us to be able to do this, we need to know how to invert binary numbers. We do this using two’s complement.

Two’s complement allows us to obtain a number with an inverse signal.

Notice that if you have any carries that overflow the word’s length you can simply drop them as we’ve done in the case above.

Another way of thinking about two’s complement is imagining it as if the leftmost bit (the most significant bit) signed the corresponding value in that place as a negative value in such a way that if you had a 4-bit signed integer like 1011, that would mean that the bit for 8 is actually -8 since it has a 1 on it and then all the other bits are positive, resulting in -8 + 2 + 1, which is -4: the two’s complement of 4 (0100). 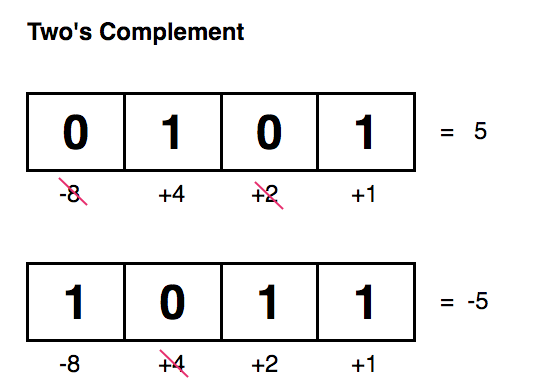 Knowing how to work with bitmasks is extremely important for operating efficiently with binary numbers.

A bitmask is simply a set of bits where the desired bits are 1s and the others are 0. We use these masks to perform operations against other binary numbers, as in the examples below.

Getting a specific bit

Let’s say you had the number 10110101 and you wanted to get the third bit from right to left. Considering that the first bit is at index 0 we are gonna say that we want the bit at index 2.

It’s important here to make it very clear that what I mean by setting a specific bit means turning it to 1, and not just assigning any value to it.

Let’s say we want to clear an specific bit (setting it to 0).

Since this topic might seem a bit ethereal without seeing the necessity of applying it, here’s a few other related topics I consider to be extremely interesting and englightening.