Why does package-lock.json exist, and how does it work?

If you’re building a RESTful API using Express, for, example, your package.json file will probably list express as a dependency.

Whenever you ask others to clone and run your application, they need to install its dependencies using npm install. Doing so will cause them to download the version 4.0.0 of Express.

Your application's direct dependency on Express.

Express depends on `send`, which causes it to be downloaded when installing your application's dependencies.

Additionally, when installing Express and, consequently, send, you will have to install the dependencies of send. Because send depends on mime-types, , a utility package to handle mime-types, NPM will install also install mime-types.

The `send` package depends upon `mime-types`.

NPM downloads the `mime-db` package when installing your application's dependencies because it's a dependency of other dependencies.

The process of recursively downloads all of your packages’ dependencies and the dependencies of those dependencies is what causes your node_modules folder to get heavy so quickly.

Even though you only listed express as a dependency, if you check your node_modules folder — the folder in which NPM stores dependencies — you will see that there are many more packages there.

This dependency download process would be beautiful if it weren’t for the fact that npm install doesn’t necessarily install the same dependencies given the same package.json file.

Running npm install in the afternoon can cause you to get different dependencies when compared to the npm install your colleague ran in the morning, even though none of you changed the version of Express upon which the application depends, for example.

Having different dependencies is a problem because it can cause the application to present inconsistent behaviour across different environments, which is yet another cause for headaches when you’re trying to build reliable software.

Why the same package.json can cause npm install to download different dependencies

When listing dependencies in your package.json file, you can prefix their versions with a ^ or ~. Each of these symbols will tell NPM that it doesn’t necessarily need to download the exact version you specified. Instead, it will try to download a version which is “compatible” or “equivalent” to the one in package.json.

Imagine, for example, that you prepended ^ to Express’ version number in your package.json.

In that case, if Express’ maintainers release a fix and bump their version number to 4.0.1, running npm install would install the 4.0.1 version, not the 4.0.0 as you’ve written in package.json.

Similarly, when Express’ maintainers release a new feature and bump their version number to 4.1.0, the npm install command will download 4.1.0, which should be compatible with the 4.0.0 version you listed in your package.json.

Most of the time, using ^ or ~ should not cause problems, because, according to semantic versioning, bumping minor — the middle version number — or patch — the rightmost version number — means that there are no breaking changes. 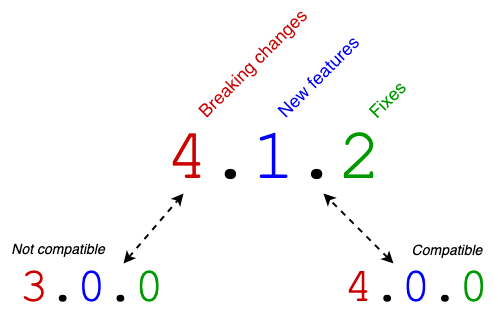 So does this mean that not using ^ or ~ causes npm install to always download the same dependency tree? No, it doesn’t 🙃

If you’ve specified Express’ 4.0.0 version as a dependency, but Express itself listed send as a dependency using ^1.0.0, for example, you could end-up downloading the version 1.0.1 of send in the morning, and version 1.0.2 in the afternoon.

Therefore, if the send package’s maintainers release breaking changes and incorrectly tag them as 1.0.2, your application could break even though you locked your application’s dependencies by avoiding ^ and ~.

The package-lock.json file lists your application’s dependencies and the dependencies of all its dependencies. In other words, it describes which version of every single package you have installed. That’s why it’s so much longer than package.json. Whenever you use package-lock.json to install dependencies, you will get the exact same packages, it doesn’t matter whether you’re installing them now or in a thousand years when we’ll hopefully not be using keyboards anymore.

To install dependencies based on your package-lock.json file, you should use npm ci instead of npm install.

By using npm ci you will be able to avoid problems which happen when an application works in your machine, but doesn’t work in someone else’s because they ended up downloading different dependencies due to using npm install.

That’s why, whenever running your builds in a continuous integration server, you should install dependencies using npm ci instead of npm install. Doing so will cause the CI server’s build to run just like it had run in your machine.

Sometimes, evil human-beings will obtain control of other people’s NPM credentials and release new versions of packages by bumping the package’s patch version number, causing millions of dependants to download the malicious piece of code.

Because npm ci will cause you to download the exact same packages every time, it will be less likely for you to install malicious code given you have taken the necessary security precautions.

Why does npm install exist if we have npm ci?

Most of the time, package maintainers will bump the correct version numbers when releasing features or fixes, and there is no harm in having these features and fixes in. If anything, they may make your application faster or solve a bug you have.

In other words, having npm install makes it easier to get the “best” versions of packages: the ones with more features and fixes.

An additional advantage of using npm ci is its quicker execution. The npm ci command runs faster than npm install because it doesn’t need to check what’s the latest compatible version of a package. Instead, it knows exactly which version to fetch thanks to the exhaustive dependency list in package-lock.json. In some cases, dependency installations can happen twice as fast.

The fact that install doesn’t by default use package-lock.json, is somewhat controversial, though. Some people would advocate that updating dependencies by default is significantly dangerous and that one should be very explicit when doing it.

Should I use npm install or npm ci?

Personally, I like to use npm install whenever I’m installing dependencies myself, and npm ci in all my scripts.

I use npm install when installing dependencies myself because, in that case, I can vet which versions I get and make sure that I’ll be using the latest versions of packages, which can include bug fixes, performance improvements, and new features.

On the other hand, I don’t want any of my scripts to update dependencies because machines running automated builds can’t vet the packages they get. Instead, I want these scripts to reproduce the dependencies I had during development time.

Additionally, I want machines’ builds to be deterministic. Given the same commit hash, I want today’s build to yield the same results as next month’s build.

In regards to pinning dependencies, I only pin those dependencies whose minor or patch version bumps cause my application not to work as it should. On other cases, I’m okay to get automatic updates and vet them myself.

An analogy with analogue photography

A package-lock.json file is the equivalent of a negative film. If you want others to reproduce the exact same photo you’ve taken, you can handle them your negative film, and every print from that negative will look precisely the same.

Similarly, when others install your application’s dependencies using a package-lock.json file, they will get the exact same dependencies, every single time.

The package.json file, on the other hand, is like a list of instructions on describing how you’ve taken a particular photo. It may include, for example, the camera you’ve used, the location from which the photo was taken, and the time of day you did the click. Even though others may follow your instructions to the letter, their photos will be slightly different depending on the weather or the surrounding environment.

In the same way, when others install dependencies using a package.json file, their dependency tree will be similar to yours, but not exactly the same.

Throughout this post, I’ve used ^ and ~ interchangeably; however, they have slightly different semantics.

You can find the complete documentation for how semantic versioning works in NPM in this link.