How I got into programming

If you have played Ragnarok Online before, you might want to listen to this song while reading.

I got into programming at the age of 14. My friends and I used to play an online MMORPG called Ragnarok Online, which was extremely popular in Brazil at that time. While they were more interested in killing monsters and levelling up, I was more interested in programming my bot farm and managing our multi-billion Zeny operation. “Automate repetitive tasks”, isn’t this what they say in our industry?

Armed with my limited knowledge of Perl, and the vision and business skills of a 14-year old, I created an empire — at least, that’s how I like to think about it.

I programmed bots to collect the game’s rarest items — cards — and sold them for millions of Zenys. Sometimes, due to their high prices, they would take a while to sell. To keep the Zeny circulating, and reinvest in buying better equipment for my bots, I’d make deals with entire clans to be their official provider of Thara Frog Cards.

When my parents noticed my computer would still be on when they woke up, they imposed strict regulations on my online business.

“By the time we wake up, your computer must be off.”

At first, I tried to circumvent the house’s legislation by programming my computer to shut down half an hour before they woke up, and by using lower performance settings so that my machine could make less noise.

This worked well for quite a while. However, it disrupted my operation in two significant ways. First, having to turn off my computer meant my bots would not be grinding until I came back from school to turn them on. And second, using lower performance settings meant I could only run a limited number of bots at a time.

I then decided to do what billionaires do when regulations prevent them from scaling: I moved my operations abroad.

As the market for rare cards began to saturate, and my margin profits began to get narrower, I decided to expand my business into other areas. Thanks to my previous successful endeavours, I had enough capital to invest.

My first expansion was into the resale market. I programmed my bots so that they would buy supplies from the cheapest non-playable characters in distant cities and resell them in popular hunting areas, where people actually need them. To avoid going out-of-stock, I always had bots on their way to buying while others were selling.

I was quite happy to have come up my own silk road — no, definitely not that one — but there were a lot more competitors in the consumables market. As my costs were lower, I could also support narrower margin profits for a longer time, which drove most competitors away. In this business I just had to sell a lot; I didn’t need to sell for much. Once again, I succeeded.

In the next year, as a much more experienced 15-year-old, I was writing regular expressions better than I could write in Portuguese. My bots were now much more human-like and could do trading with other players all around the world of Rune Midgard. With this capability, I made them buy minerals and resources from other players and send them to alchemist and blacksmith bots to craft weapons or potions. 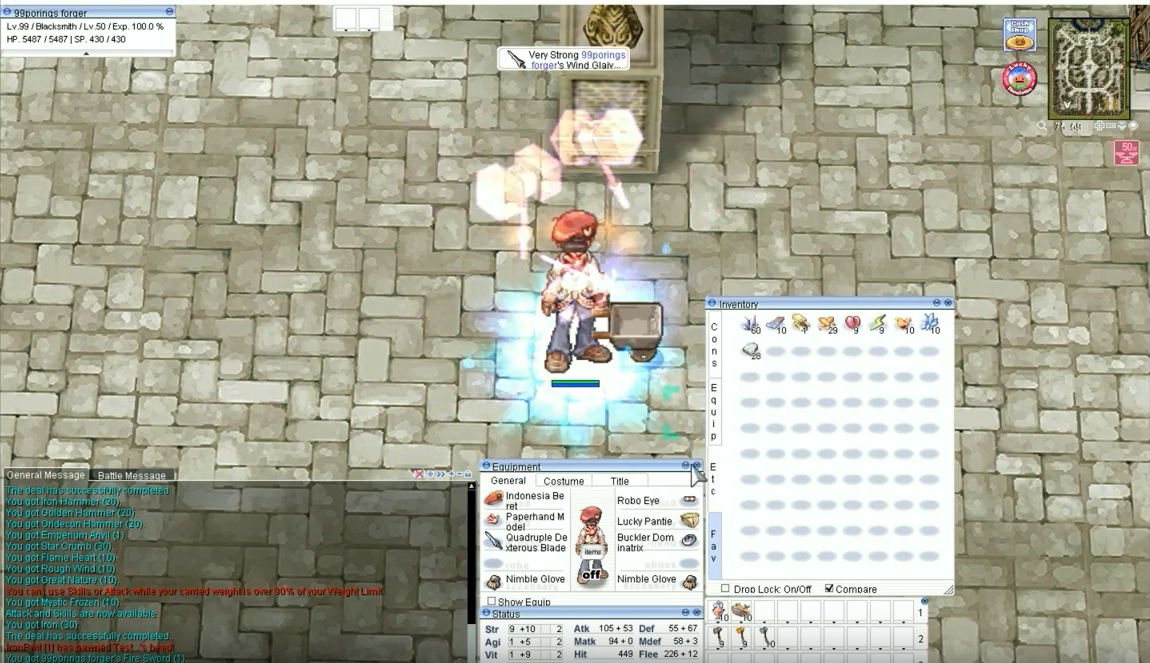 A Blacksmith in Ragnarok Online (Source)

My last triumph and the end of my career in Ragnarok Online came after investing many months in research and development so that my bots could complete entire quests on their own. These quests were incredibly long, and, sometimes, their rewards were random.

A high quantity of some quest rewards could be used to make what we called “godly items”. These items were so expensive, and so many of them were needed that, at that time, no one had enough money to buy all that was necessary to create a godly item.

One of my best friends in the game at that time was Pluto. Pluto was a 30-something-year-old psychoanalyst from Salvador, Bahia, in the north-east of Brazil. His dream was to have a godly item, more specifically, the Manteau of Asprika.

Since I was planning on retiring from Ragnarok Online, I decided I was going to do one last good deed. It only took me a couple of days to have bots collecting Rose Quartz stones and the other items necessary for the manteau.

In one or two weeks, I gave Pluto all the items that he needed. A few hours later he sent me a message which said something like:

Lucas, thanks for your hard work. What you just did is really impressive. I know you’re very skilled when it comes to technology, and, if that’s what you decide to do with your life, I’m sure you will be very successful. Thank you very much!

That message made me a programmer.

Pluto doesn’t know, but with a few words, he’s given me a career, and a lifetime passion.

I hope that Asprika Manteau was enough to pay for all of this, but, if I could, I’d had given him three.